In response to reports of persecution of LGBT people in Tanzania,the LGBT community in Israel is seeking to put international pressure on the Tanzanian government in hopes of ending the persecution.

The Aguda – Israel’s LGBT Task Force announced that it would hold an open meeting on the situation of the LGBT community in Tanzania.

Even before the Israeli community’s action plan was formulated against the persecution in Tanzania, a young queer activist decided to act and infiltrated the office of the Tanzanian consulate in Israel to convey a message to him.

“I just felt that I could not be silent,” the activist told WDG. “I checked where the Tanzanian representative is in Israel and found out she was staying at the Mandarin Hotel in Tel Aviv. Since only hotel guests can enter, I went into the hotel accompanied by a tourist and pretended to be on my phone. I did not move my eyes from my iPhone. They were the most stressful 60 seconds of my life.”

When he reached the elevators, he realized that he did not know what floor the mission was on. “I pressed the 13th floor and when the elevator door opened, the office was right in front of me. I quickly hung up the flag, but then a hotel employee passed by. I took the flag off quickly and after he passed by, I went back into action. In the end, I went down 14 flights by foot and went out the hotel’s back courtyard to avoid cameras. ”

The activist, who asked to remain anonymous because of his military service, believes that although this is a small act, it is impossible to know what effect his actions will have.

“I believe in the saying, ‘You do not have to finish the job, but you are not free to desist from it,’ which means you do not have to change the whole world, but you have to do something,” he explains. “I believe in raising my voice. You cannot be silent. The littlest thing can lead to the biggest change. We can not understand everything, but sitting idly by saying that the situation is shit and there is nothing to be done about it is the last thing we should do. We take part in history, the enlightened part.

I hung articles on the wall of my room about the amazing protest we organized last summer and between them, there are letters that my family prepared for my trip to Poland. My sister asked me to do everything I can so that something like this would not happen again and my grandfather and grandmother asked me to go with the flag proudly raised. It is very sensitive to compare to the Holocaust, but what I mean is that when we as an entire people suffered, there was no one who cried out with us. The majority was quiet, and that’s why evil wins, because good people are silent.

I felt that history simply repeats itself, and as a person with a Jewish soul I just couldn’t remain silent. I feel an LGBT bond with LGBT people who live a life of fear. I feel they are my brothers and sisters. I did not want to wait, and it was the least I could do at that moment. It’s easy to shout and say “no more,” but you have to make sure every day that things like this will not happen, not queerphobia, not racism, not sexism. History repeats itself and we must do everything in our power to ensure that things will be different this time, that things will be better.” 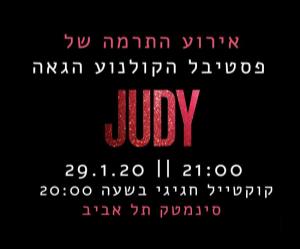